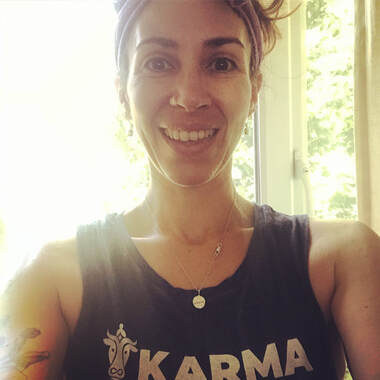 Angela is a Pilates Foundation accredited Matwork teacher, holds an MA in Movement Studies from RCSSD and is currently training to be a Dru Yoga teacher.  Originally from the Nova Scotia, Canada, Angela arrived to the UK in 2005 and happily resides with her husband & two rescue dogs in South London.

It was a passion for movement and well-being, and an enjoyment of Pilates that led Angela to do her Pilates teacher training in 2012-2013 with Allison Swan.  With a career in performance as an expressive movement teacher and theatre movement director, Angela wished to further her understanding of the human body.  Little did she know how much she would love teaching Pilates!

Angela works with a sincere belief that movement work is for everyone - sometimes we can be scared of it and feel we can't do it, but we can, we do it everyday!  Pilates & movement work is not only for fitness of the body, but fitness of the mind and heart.  Angela's approach to Pilates is gradual, motivating and specific, with a real focus on alignment within the body, connection to breath and overall well-being.  Her teaching is exploratory, flowing and creative (even fun!)

Angela is a Board member of the Pilates Foundation where she is currently focusing on working with Ethelinda Lashley-Scott on Diversity & Inclusion in the Foundation (@ beyond!). The Pilates Foundation is an organisation of teachers that focuses on continued professional development in Pilates practice.

Angela is insured through Balens Ltd.

How did Angela get into Pilates & why does she keep doing it (& teach it)?

I was initially drawn to Pilates as a student as it was a slowly paced, mindful and specific movement practice. I am quite flexible and would often injure myself because of it - I needed to become more aware and gain fundamental strength so I could both control my flexibility and support it.  As I continued to work with Pilates it not only helped my body to align and fundamentally become stronger, but also fostered a greater physical and mind-body awareness.  Pilates gave me the opportunity to really work on the integration of breath and action, and specific use of my body in action.  When I did my training as a teacher I really began to discover how profoundly even the most simple exercise can help improve a person's personal alignment, understanding of their own body and their functionality.  The integration of body and mind in movement, and the sense of physical strength and personal well-being Pilates offers me is what feeds my enjoyment and appreciation of this work, which I love to teach & share. - Angela 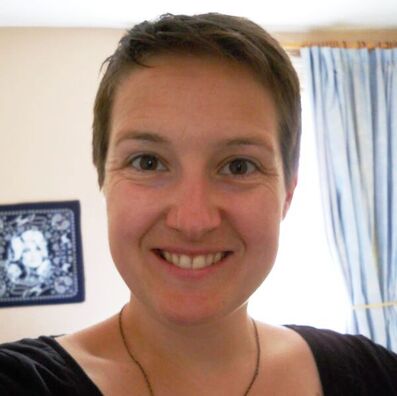 Originally from Te Whanganui-a-Tara (Wellington) in Aotearoa New Zealand,  Margaret arrived in
the UK in 2009.  She is a Body Control Pilates Level 3 Matwork Teacher and a member of Body Control, certifying in 2017.  Margaret was inspired to start Pilates after dealing with chronic pain issues that made other exercise difficult, but was too intimidated to try classes so turned to YouTube. After doing her best to keep up with videos of absurdly flexible instructors in skin tight lycra, she worked up the confidence to leave her bedroom and discovered  illume pilates classes just down the road. Here she discovered that there was a whole lot more to this Pilates business than YouTube had ever shown her, and became a disciple of Angela's  inclusive, thoughtful, and joyous classes. After around five years as a dutiful, if occasionally hungover, student, she began studying to become a teacher.

Since then she’s been privileged to be mentored by many great teachers, and has worked on a teaching practice for both in-person and virtual classes. Passionate about helping people manage and reduce their pain and discomfort, she’s particularly interested in how Pilates can help clients feel more at home and confident in their bodies.

When not on the mat, Margaret works as a digital marketer/advisor on all things Google, is a true crime critic, podcaster, craft activist and movie night host.  For more on Margo:  https://www.pilateswithmargo.com/

Margo is insured through Gallagher Services.